Ongoing leaks in the building of Leicester Southern Fire Station resulted in a search for an effective refurbishment solution.

On inspection of the roof, it was found that the original gutters were corroded and had started to leak. In addition, the metal roof had extensive cut edge corrosion and was showing signs of delamination.

For the gutter refurbishment, Sharmans Plygene Gutterline system was chosen. Plygene Gutterline is the only BBA approved gutter lining system specifically engineered to restore and preserve gutter performance for industrial and commercial buildings.

Providing a 25 year guaranteed, BBA approved, “gutter within a gutter” system, Plygene Gutterline offers a bespoke solution with minimal building disruption and is an effective alternative to full gutter replacement. Plygene Gutterline is designed to reduce site complexity and is quicker to install compared to the likes of liquids and membranes. It is non–bonded, eliminating the need for initial extensive remedial cleaning prior to fitting and the system’s bespoke moulded components reduce labour complexity during the installation process: the net result being faster installation and less building disruption. 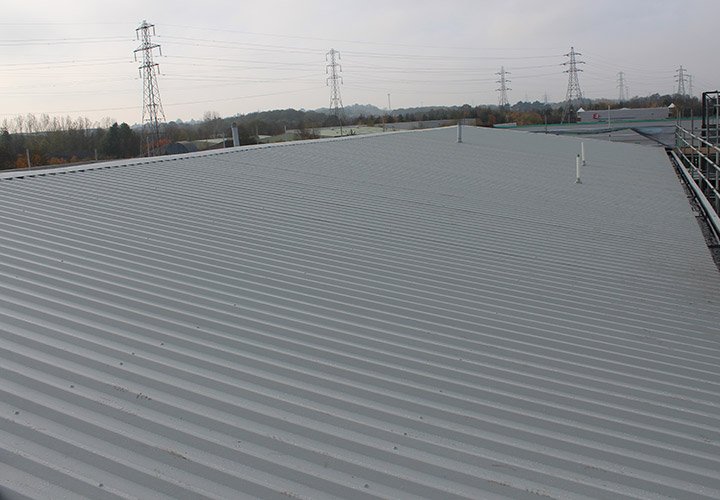 Due to the level of roof sheet deterioration, Delcote full roof coating system was used. The system is manufactured by Sharmans. It is also the only system endorsed by Tata Steel. The key advantages of recoating the existing roof with the Delcote system in lieu of oversheeting were:

The Contractor, Cure Roofing, who are a Sharmans “Approved Contractor”, carried out the refurbishment of the roof and gutters installing the Sharmans systems.

“Permanent leak prevention and minimising building disruption were critical for the successful completion of this project. We supported the specifier at each stage of the project, from the initial building inspection and condition report, scope of specification works and on-site support and inspection audits. The specifier wanted systems that were not only guaranteed but also had a proven track record in the industry, which Delcote and Plygene Gutterline have achieved over the last twenty years.”