Galvanised steel is an excellent substrate for gutters in the commercial and industrial environments. A strong and durable metal, steel has a thermal expansion rate of about 50% that of aluminium and it’s also cost effective.

Gutters are typically formed from GBM (Galvanised Before Manufacture) steel sheet between 1.6 and 3mm thick. Galvanising coatings typically vary between 275 – 600 grms/sq mtr but should be towards the top end of this scale for gutter environments. It’s the addition of the galvanised zinc layer that makes the surface resistant to oxidation and rust.

The gutter sections are typically 3m long and bolted together with a flexible seal between and this is where the problems start. Fabrication and welding processes destroy the zinc coating necessitating local post manufacturing treatment to restore corrosion resistance using a zinc-rich ‘cold galvanising’ paint.

Industrial and commercial gutter systems are usually the first part of the building envelope to be installed after the construction of the frame. The result is that the galvanised gutter is used as an access way and / or storage area during the roof construction causing surface damage and wear even before building hand over.

The life expectancy of a galvanised coating in the gutter environment is a maximum of 10 years, but in coastal areas can be as low as 2 years.

Galvanising is soft and becomes thinner over time as the coating is eroded and is ALSO attacked by acids in the rain.

Here you can see where the run off from the roof has impacted and eroded the galvanising and corrosion has started to affect the steel. 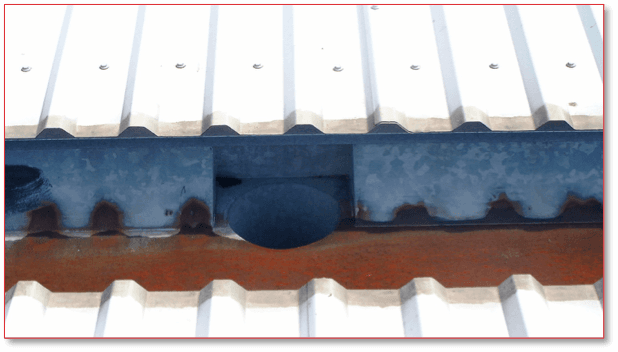 If left untreated, corrosion continues, here we can see that only part of the coating remains

Corrosion has continued eating into the surface, the exposed cut edge of the sections and the fixings. 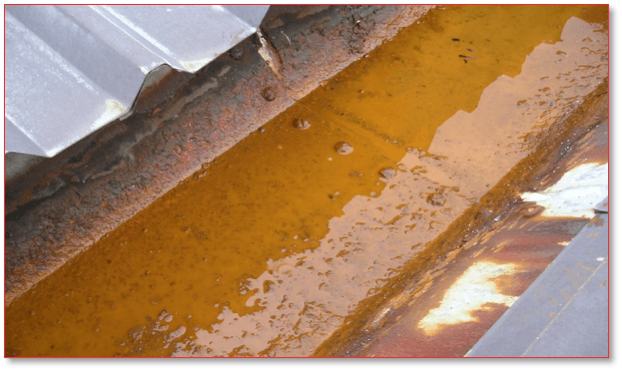 Gutters are generally not laid to falls which means that with the constant presence of water between outlet points, corrosion continues to weaken the substrate to the point of failure.
This is obviously an extreme case, but any perforations are allowing water into the building. 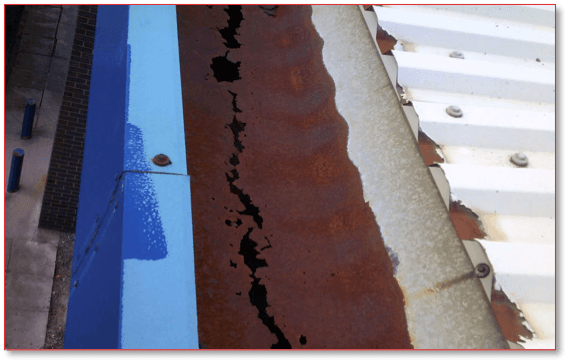 Failures in any system will always become evident at its weakest point, which in a gutter system is going to be at joints and changes of direction. Once corrosion has set in and a joint has started to fail, building movement, thermal expansion, freeze/thaw will further exasperate the problem. Once a joint has opened up it can be difficult to fix because of the build-up of dirt, debris and moisture around the opening.

Plygene is a blended thermoplastic specifically engineered for the gutter environment. Non-bonded and seamless in design it doesn’t require the application of etching primers to the galvanised layer required by liquid coatings and bonded membranes. Nor does it require the full cleaning and rust removal required by these systems prior to refurbishment.